In February 2020, the NSW Rural Fire Service reported that 2,439 homes had been destroyed in NSW and over 17 million hectares of land was burnt across the region.

Amidst the tragedy, hundreds of generous donors
stepped in to help those in need. With $220,770 donated specifically to bushfire recovery in addition to funding from the Department of Social Services, Anglicare was able to respond quickly and provided assistance to more than 700 bushfire-affected households.

Anglicare is committed to remaining with local communities as long as possible and is currently providing pastoral care, financial counselling, emergency food relief, new clothing through our partnership with Thread Together and is working on a number of community development projects.

Carlin Stanford is one of six Anglicare Bushfire Recovery Coordinators employed in the aftermath of the Black Summer fires. She and her husband were attracted to the New South Wales South Coast town of Cobargo for its natural beauty and unique community. But things changed during the bushfires which swept through the region last year.

She and her family began volunteering at the Bermagui Surf Lifesaving Club which was an unofficial evacuation point. Shortly after the fires were contained, Anglicare recruited Carlin as a Coordinator specifically from the local area.

Carlin started working out of a caravan on Cobargo’s main street, which is where she continues to work today.

The recovery landscape is becoming more complex. Those few families who have managed to rebuild their homes, now face the new challenge of having the capacity to deal with the full impact of the fires on their mental and emotional wellbeing.

Community-led recovery, through key people like Carlin, is one of the best approaches following a traumatic event such as the fires. But this relies on community members being strong enough to lead. One year on, many people are finding that they are no closer to rebuilding. Instead, they’ve endured 12 months of hard and costly living which have diminished their dreams of owning a new home. They are tired. Because of this, Carlin has worked collaboratively with a counsellor and establish ongoing wellbeing workshops. Many of the community leaders who stepped up early to help are now exhausted and pulling back. Community-led recovery still needs ongoing support from organisations like Anglicare. But Carlin is optimistic.

“My hope is that support can continue so that this community and many others, though changed by these fires, can recover and become even stronger than before,” says Carlin.

Carlin pictured below outside the Cobargo Bushfire Recovery Van – located on site at the RSL Memorial Hall. 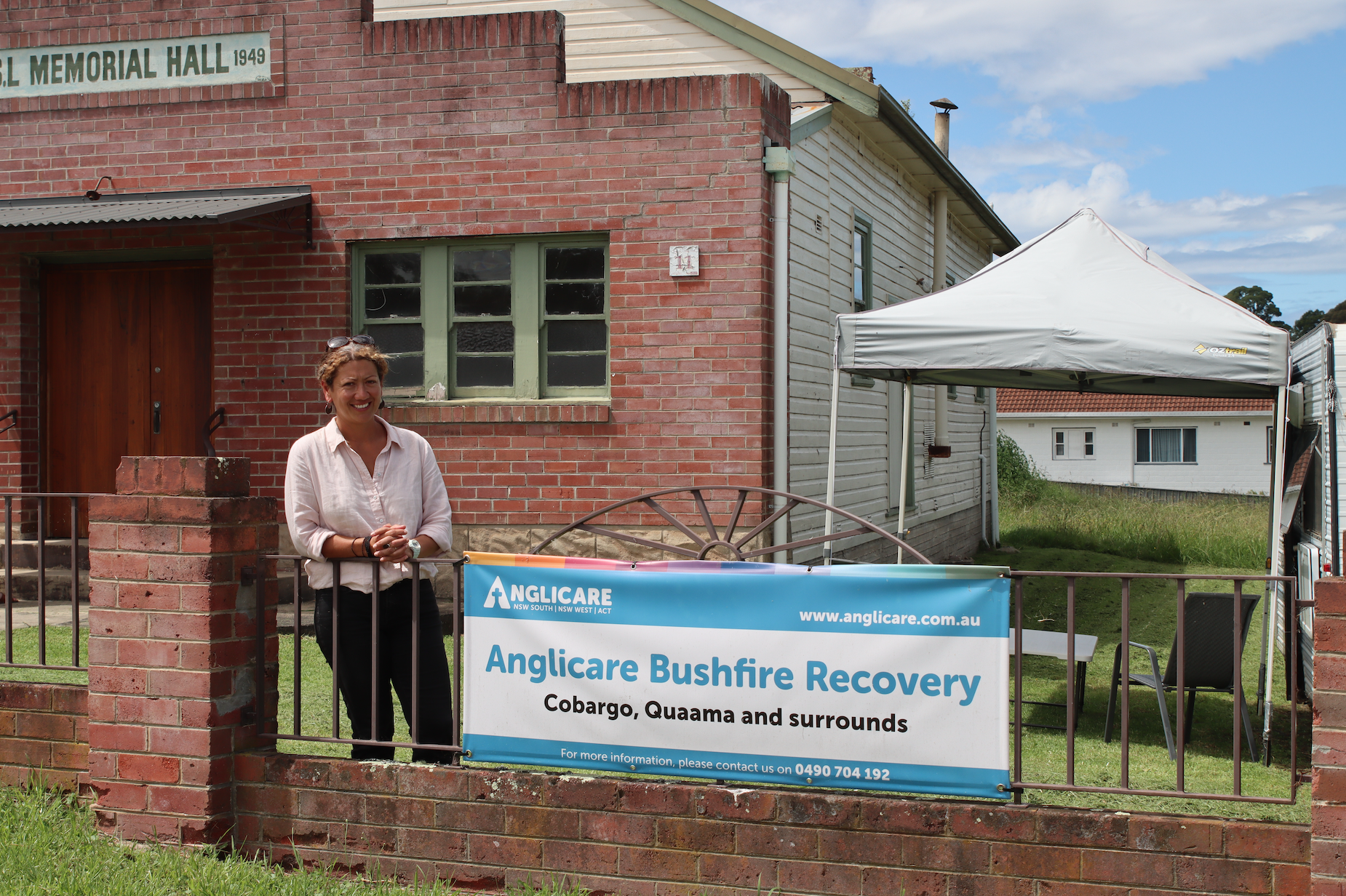 Anglicare acknowledges Aboriginal and Torres Strait Islander people as the Traditional Owners and Custodians of our land and seas. We acknowledge the history of this land and for the stories of resilience and survival which make up Indigenous Australia. We give thanks for Aboriginal Elders and Knowledge Keepers of every generation, including the many Aboriginal families and communities which contribute to the life of our region. Read more about our Reconciliation Action Plan.